If there was a way to communicate a girly squeal through text, I would do it! Say what you wish about fantasy series’ like this, which maybe er on the cheesy side on occasion (sorry not sorry, we all know it’s true!), this book made my heart feel so full.

The book itself was riveting, the tension was high throughout without it feeling forced or becoming dull. There were so many moments that showed evey facet of humanity, despite being about various groups of non-humans, most of which were very apt given the current political climate in the U.K and America (oh yes, the Dearborns may seem like assholes but they’re nothing compared to some of the politcal leaders and policies we’ve got going on right now.)

As for the ending, it somehow tied up everything in a neat little bow and, at the same time, left of on a major cliffhanger. I have preordered the next three books due to be released by Cassandra Clare. I don’t even care, I am fangirling hard for this writer.

Scew any and all crticism about the genre or the writing style, any book or writer that can make people feel like this when they’re reading, deserves lots of praise.

However, my highest praise about this book is the effort that has clearly been put into the characters representing all kinds of different people (a.k.a like real life, an important element many books lack!). There are many LGBTQ+ characters, there is a character with autism, there are many characters of different races (and indeed species!), there are even different types of relationships shown. It is sad that I found it so different and refreshing to read about those kind of characters. Yet it clear that pain staking attention to detail has gone into it but it does not feel forced, these facts about the characters have a point and purpose, i.e. not some crass, here is your ‘token’ representation. They have struggles that are directly related to this part of themselves but it all serves to prove a point about the flaws in shadowhunter laws, the prejudice and how they remain static by clinging to traditions without adapting them to the changing world. All of the novels based in this shadowhunter universe are geared toward this issue. Meaning  these characters are an integral part of the plot because she could not make this point, or iniate any change without them. Additonally, they are directly representing real life struggles  many people face and throw into light the flaws in real world systems. Although, as I am not part of any of the comunties’ she is trying to represent (being white and straight) I could be wrong, maybe someone who comes from a different perspective does not feel it was done well. I can admit I’ve only got one view point here but regardless of how well these diverse characters have been written, the fact is that they are there, which should be praised in itself, I think. 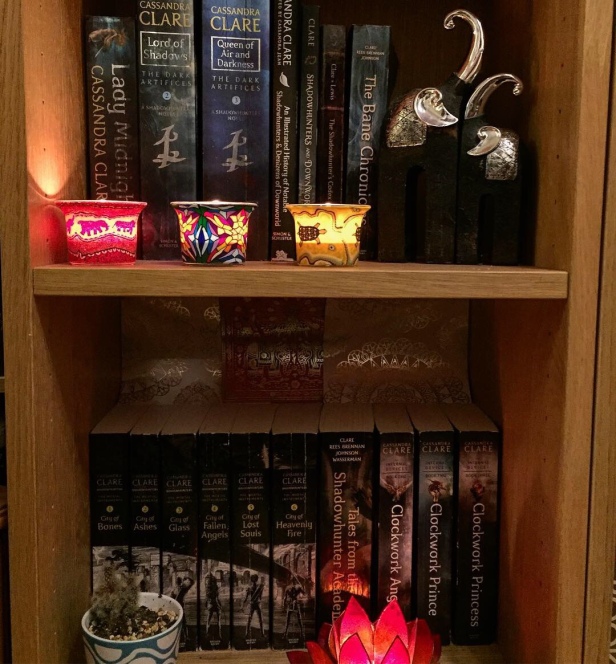 Anyway, here is the link to the good reads plot summary ,

thanks for reading, I realise my book reviews are some what unconventional… but so few tell you how it feels to read them. I think there’s more to it than a factual analysis of plot etc.

Buy me a coffee

I maintain this blog alongside full time work. My dream is to write for a living but we can start with coffee!

Episode 60: The Christmas Episode noone asked for - Lazy Book Lovers

Tali and Toni end the year doing stupid games in the name of Christmas fun! Our links: https://lazybooklovers.carrd.co/
Processing…
Success! You're on the list.
Whoops! There was an error and we couldn't process your subscription. Please reload the page and try again.
Loading Comments...
%d bloggers like this: